skip to main | skip to sidebar

The beads and the ribbons, the baubles and balls,
are all a distraction from real Christmas calls.


It's not about hours spent finding gifts for family and friends.
It's about minutes spent caring for the unnoticed, unloved and uncared for He sends.


Are we being WISE MEN?

Have a wonderful week!

Truth is.......just need to put a few more ornaments on the tree and it is done and that damn ladder that has been in the MIDDLE of the family room can be put away.

Truth is......I ordered Christmas cards at MIDNIGHT on Saturday.  I think they get here next Tuesday.

Truth is......Trammell and Jen (the sutnningly beautiful fiancee) arrive tomorrow, so NOTHING else matters.

Truth is......every single year, I get to about the 15th and wish that we had JUST ONE EXTRA week to get ready for Christmas.  Why can't we turn back the hands of time?

Truth is......every single year, I swear that NEXT year will be different.  Guess what?  It won't!

Are you feeling a little bit like the Grinch or Ebenezer Scrooge?Here are some Christmas Carols to lighten the mood, put things in perspective and help you feel more "peace on earth, goodwill toward men."
1. Schizophrenia --- Do You Hear What I Hear?

3. Dementia --- I Think I'll be Home for Christmas
4. Narcissistic --- Hark the Herald Angels Sing About Me

5. Manic --- Deck the Halls and Walls and House and Lawn and Streets and Stores and Office and Town and Cars and Buses and Trucks and Trees and.....

6. Paranoia --- Santa Claus is Coming to Town to Get Me
7. Borderline Personality Disorder --- Thoughts of Roasting You on an Open Fire


Of course, I didn't make these up.  I'm NOT that creative.  However, it IS quite possible that someone has been spying on me and my behavior inspired some of these carols.

What?  It's Tuesday?  It's December 12th?
I am SO not ready for Christmas.  But at least I have some Christmas RaNDoM for you!
And if you can't get enough RaNDoM, go on over to Stacy's.  She's got MORE than enough for everyone.  She's the Hostess of RaNDoM!

* It wouldn't  be Christmas without the sound of an ornament falling from 10 feet and shattering! 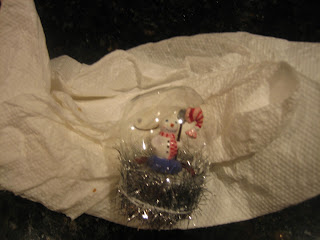 And of course, it has to be one filled with some kind of toxic liquid.
I should have called Hazmat.  Who knows what they put in those snow globes.
* Yep, I did it!
The ladder has been poised in the family room for two weeks.
The tree has been lit and bedecked with beads and bows,
but nary an ornament has found it's way on the tree.
I STARTED decorating it last night.........in a skirt.
Yea me!
* I was unwrapping ornaments and came across this - 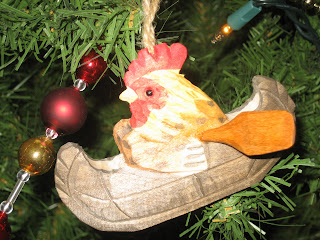 WTH?  A rooster in a canoe? This is HIDEOUS?  WHO brought this in to the house?
One look at the underside of the canoe and I saw "Garrett 2010"
I marched into my office, where Parker was taking a test.
"This is horrible! Why did Garrett pick this for his ornament last year? He is NEVER allowed to pick ornaments again."
"Mom, you are disturbing the testing center. Please!"

* Several ornaments later.  I unwrapped this - 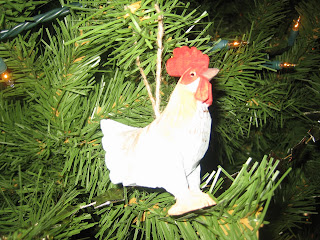 Oh my gosh!  What is wrong with my children?
I looked at the bottom of the cock's rooster's feet and saw "Parker 2010."

I march in to my office the "testing center" and proclaimed,
"YOU are not allowed to buy any ornaments either!"
"Mom, it's cool! What did Trammell buy?"
"I don't know, but it was probably something mature!" 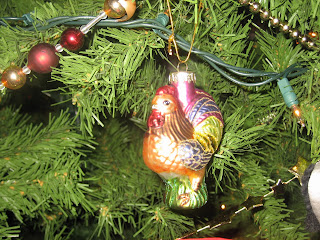 Trammell  2010
* Not mature, but WAY more classy! Who can argue with a colorful glass cock rooster.
I marched in to my own office one more time.
"What is wrong with you guys? This isn't holidayish?  This is ridiculous!  Don't think I don't know EXACTLY what you boys were thinking."
It's times like this that being the only child home is SO much fun!
"What?"
"You all bought roosters.  That's NOT funny!"
"But mom, we're the cocks Coxes!"
Merry Christmas from the Cocks Coxes!

As I mentioned, Parker got sick of sitting in boring classes.
He applied for early graduation............2 1/2 months past the deadline.

I feel a little bit like my life has turned into the Ferris Bueller movie!

One of the requirements is that HE had to write a paragraph detailing why he should be allowed to graduate.

Another requirement is to have your parents write a paragraph explaining why they support the decision for the student to graduate early.

Here is mine -
"We mostly support Parker’s desire to graduate early. I kind of want him to stay because it’s six hours of free babysitting and I know where he is during the day. But you and I both know that he is just there killing time with stoners, losers and tramps.

Seriously, the school was phenomenal when Trammell attended. And then I blamed Garrett’s intelligence and study skills when it seemed he wasn’t getting the same quality education that Trammell received. But now, I realize that I need to apologize to Garrett. The school has slipped. Parker is bored out of his skull. He’s no dummy. He wants to maintain straight A’s and he wants to be in a stimulating atmosphere. He loves his AP classes. But he has enough smarts to realize that taking ALL AP classes would cut into longboarding time and any kind of social life.

Every day is a battle to get him to go to the “regular” classes. The students are unmotivated. The teachers are disorganized and undemanding. When he gets to class and he is one of just a few kids who have actually done the homework, he is disgusted that the teacher then allows the kids to spend the class period completing the homework that he responsibly completed last night. He spends those periods surfing the web for airfares to longboard races and designing custom boards. Why not let him do that in the comfort of his own home?

Our relationship with the high school is no longer mutally beneficial. He isn’t learning anything. It’s time to move on.......or I could just excuse him from all the useless classes on a daily basis.  It's up to you.

The Blessings of the Temple

I am speaking in church today about the blessings of the temple.
They are too numerous to mention in my 7 minute talk, but I love the temple because it brings me peace and perspective.

The temple is where we can be sealed to our spouse and to our family so that we can be together for eternity.

The temple is all about Christ and helps me be less selfish and more charitable.......and I can ALWAYS use a little reminder of that!


If you have ever wondered why Mormons even have temples or what they do there, check out this video.

Posted by The Crazy Coxes at 9:10 AM 4 comments

SOMEONE is hosting a little bit of fun!Mrs. 4444 is the QUEEN of Friday Fragments!

Go pay her a little visit!

* Meanwhile - can SOMEONE tell me why this was the LONGEST week known to man,
but it is already mid December and I haven't gotten ANYTHING done?
Is anyone else having technical difficulties with their calendar?

* SOMEONE is a little bit excited about getting married.
He's been engaged for 10 days and they have -
reserved the temple (okay that was done a month before they got engaged),
reserved the location for the reception,
planned and paid for the honeymoon,
hired a photographer,
and hired a videographer.

I should have had them organize my Christmas!
And maybe it would be done!

* Meanwhile, the youngest Cox is missing school today.
But it's for a important reason.
He's at the State Cheerleading Competition.
SOMEONE has to support the cheerleaders!

* SOMEONE at our house has not even started Christmas shopping.
But I that someone is going to start AND FINISH it today/tonight.

* Where are those Christmas elves?
I need them to come on over and decorate the house!
More than decorate, SOMEONE needs to put away the bubble wrap, bins, paper, and bows that are ALL over the floor.
And for heaven's sake, can SOMEONE put away the ladder that has dominated the family room for two weeks?
But before you put it away, go ahead and decorate the tree.
Evidently, it's not going to decorate itself.

* Just for the record -
I would prefer that ALL my storage bins match and are of a neutral non-holiday color - like blue or gray.
SOMEONE thought it would be a good idea to have orange bins with black lids for Halloween decor and red bins with green lids for Christmas decor and spring green for Easter.
Well, it WOULD be a good idea unless SOMEONE puts the Glitter Corn in a red bin with a green lid.
Glitter Corn is NOT a Christmas decoration! What color would a Thanksgiving bin be?

* Oh, I have HIGH hopes for this weekend..........
like cleaning the house,
writing a talk for church,
getting in the Christmas SPIRIT,
finishing the Christmas decorations,
Christmas shopping,
making Christmas cookies and maybe trying my hand at some toffee and other candy.
Don't distract me!!!!!

Have a great weekend!
Posted by The Crazy Coxes at 11:32 AM 16 comments

Look! Look! It's My Own Blog Button! Go ahead! Grab it! 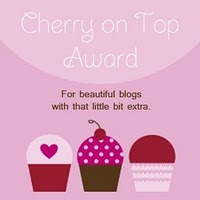 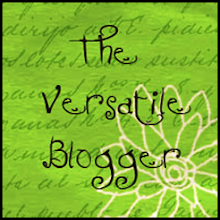 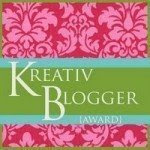 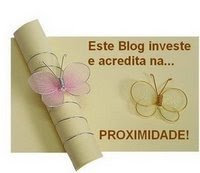 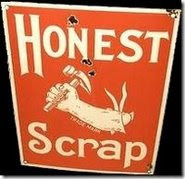 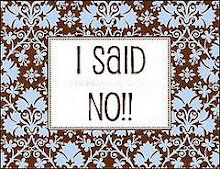 Sellling for the summer in Little Rock, AR Livin' the Dream - right here at home! He's a junior and wishes he could golf and snowboard his life away!

I changed my font at thecutestblogontheblock.com